2019 Ryan Blaney 3D printed figurine. Ryan is printed in his Menards uniform. This figurine is Incredibly detailed and lifelike. It is 3.5 inches tall and looks awesome beside your diecast car collection. A great addition to every NASCAR collection.

Ryan Michael Blaney (born December 31, 1993) is an American professional stock car racing driver. He currently competes full-time in the Monster Energy NASCAR Cup Series, driving the No. 12 Ford Mustang for Team Penske and part-time in the NASCAR Xfinity Series, driving the No. 12 Mustang for Team Penske. He is the son of NASCAR driver Dave Blaney and the grandson of modified dirt track legend Lou Blaney.

A third-generation racer and son of then-Cup Series driver Dave Blaney,[1] Blaney started his racing career in quarter midgetracing, winning his first race at age 9;[2][3] he also competed, and won, in Bandolero cars at a young age.[4] Moving up to Legends cars at age 12, Blaney won the Lowe's Motor Speedway Young Lion's Winter Heat Point Championship, as well as in three divisions of the Carolina Fall Nationals in quarter midgets.[2]

At age 14, Blaney debuted in late model racing at Orange County Speedway, while in 2009, at age 15, he began competing in the Pro All Stars Series (PASS)-sanctioned South Super Late Model Series, finishing second in points and winning the series' Rookie of the Year award; he finished third in the PASS national points as well. In addition, he won the Eastern Grand Nationalsquarter midget event in Huntsville, Alabama.[2]

For 2012, Blaney, who had won praise from Tony Stewart and Kevin Harvick for his driving skills,[7] returned to the K&N Pro Series East, running six races for family-owned DB Racing, driving the No. 10,[8] as well as to the PASS Super Late Model Series in the Carswell Motorsports No. 98.[9]

In July 2012, Blaney announced that he had signed a contract to drive for Team Penske a minimum of three races in the 2012 Nationwide Series season, starting at Iowa Speedway in August.[12] He also ran selected races in the Camping World Truck Series for Brad Keselowski Racing,[13] finishing sixth in his debut in the series at Bristol Motor Speedway.[14] Blaney won his first career Truck Series race on September 15, 2012, at Iowa Speedway; at the time, he was the youngest winner in Truck Series history at 18 years, eight months, and 15 days. The previous record was 20 years and 18 days set by Kyle Busch in 2005.[15][N 1] 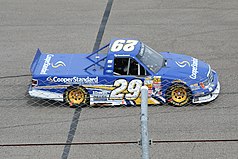 Blaney returned to the Camping World Truck Series in 2013, driving the full schedule for Brad Keselowski Racing and competing for the series' Rookie of the Year award.[17] Blaney won his first career pole in the series at Kentucky Speedway in June,[18] then won his second career Truck Series race at Pocono Raceway in August.[19] Blaney also competed in the Nationwide Series at Iowa Speedway in June, substituting for Joey Logano after a rainout created a schedule conflict; Blaney finished ninth in the event.[20] Blaney competed in a second Nationwide Series race in 2013, at Kentucky Speedway on September 21, and led 96 of the race's 200 laps to win his first career race in the series, beating Austin Dillon and Matt Crafton.[21] Blaney was the only race winner in the 2013 Nationwide season to not have any Sprint Cup experience.[22]

Blaney drove the No. 29 truck full-time for Brad Keselowski Racing. He had many Top 10 but failed to win in the spring. However his year's turning point was at Dover in late May 2014, when he came up short to Kyle Busch who beat him by 0.5 (one car length) seconds for the win. After the race Blaney was one of the drivers who said that because Kyle was winning a lot in the truck series, that the Cup series drivers should no longer race in any division besides the Cup series.

Blaney won his second career Nationwide race in August 2014 at Bristol Motor Speedway, beating Kyle Busch in a green-white-checkered finish. The next week, Blaney won his first Truck race of 2014 in spectacular fashion at Ron Fellows' own Canadian Tire Motorsports Park raceway, edging German Quiroga by 0.49 seconds in a photo-finish.

In 2015, Blaney began his Xfinity Series schedule at Las Vegas in the Boyd Gaming 300. After leading two laps, he was briefly in contention for the win. After spinning out fellow driver Erik Jones late in the race, Blaney restarted the final restart in eighth place. Despite this, he drove from eighth to second in the final 21 laps. Though he caught up to race leader Austin Dillon with three laps to go, Blaney was unable to force his way by Dillon. Blaney finished second to Dillon by a three car-length winning difference.

Blaney during practice for the 2016 Pure Michigan 400

In the Cup Series, Blaney performed well for a rookie in the No. 21 for the Wood Brothers team. He picked up his first Top 10 at Talladega in the Geico 500, running as high as second and finishing 4th. He didn't qualify for three races due to rainouts. He nearly won at Indianapolis Motor Speedway in the Xfinity race, finishing second to Kyle Busch after being passed on the final lap. He won at Iowa and nearly won at Road America in his debut at the track. He again won at the Kentucky standalone race in September beating Ty Dillon on a late race restart. Blaney got his second top 10 of his career in Sprint Cup at Kansas for the Hollywood Casino 400 finishing seventh.

Blaney began competing full-time in the Cup Series in 2016 with the Wood Brothers despite that the Wood Brothers were excluded from NASCAR's new Charter system implemented before the 2016 Cup series season.[25] He got his third Top 10 of his career in Sprint Cup, finishing 6th in the Kobalt 400 at Las Vegas. Blaney picked up more top tens at Phoenix, Talladega, Kansas, Dover, and Pocono for a so-far successful half of the season with his best finish being a 5th at Kansas. Before the race at Auto Club Speedway, Blaney and close friend Darrell Wallace Jr. drove together from Phoenix to Fontana and stole the headlines one evening when they took over NASCAR's Snapchat and filmed themselves mimicking drivers such as Carl Edwards. At Chicagoland, Blaney ran well all day and for the final restart he gambled and stayed out, and got the race lead. However, on the restart Martin Truex Jr. would get past him easily due to having fresher tires and would go on to get the win and Blaney would finish 4th.

In 2017, fellow single car team Go Fas Racing announced that they would loan their charter to the No. 21 Wood Brothers team, guaranteeing Blaney a spot in every race of the 2017 season. During the Daytona 500, Blaney, despite being caught up in an early wreck, charged from 5th on the final lap to place second to Kurt Busch. Ryan Blaney had a better race in April at Texas Motor Speedway. He qualified second to Kevin Harvick. He then passed Harvick early in the race to lead the next 148 laps. However, a late-race pit stop error cost Blaney the race. He recovered from his mishap and finished 12th. At Kansas, Blaney won his first career Cup Series pole. The race was primarily a duel between him and Martin Truex Jr. After battling Truex for 3 restarts, Truex pulled away to win the race while Blaney finished fourth.

Blaney after winning the 2018 Bank of America Roval 400

In June, he won his first career Cup race at the Axalta presents the Pocono 400 at Pocono Raceway. After passing Kyle Busch with 10 laps to go, he held off Kevin Harvick to claim the victory, qualifying him for the playoffs.[26] On July 26, Blaney announced he would be moving to Team Penske's No. 12 car for the 2018 season; Paul Menard was signed to take over the No. 21 car.[27] At the end of the regular season, Blaney entered the playoffs as the ninth seed, courtesy of his win at Pocono and three stage wins.[28] During his playoff run, Blaney made it all the way into the Round of 8, highlighted by a third-place finish in the Round of 12 finale at Kansas, despite having to start last and at the rear of the field after his car failed post-qualifying inspection.[29] Blaney then scored consecutive top ten finishes at Martinsville and Texas, but despite winning the pole for the Round of 8 finale at Phoenix, he faded outside of the top ten by the end of stage one. He rebounded to secure eighth by the end of stage two, but could not improve his standing on the track, ultimately finishing the race in 17th and being eliminated from the playoffs.[30] Blaney wound up finishing 29th in the season finale at Homestead-Miami Speedway, securing a ninth-place finish in the final Cup Series standings with his one win, four top fives, 14 top tens, four stage wins, and two poles. His ninth-place points finish was also the highest for a driver for the Wood Brothers since Morgan Shepherd finished sixth in the final Cup standings in 1994.

For his tenure at Team Penske, it was announced that Penske would enter a primary sponsorship deal with John Menard Jr. and Menards, which sponsors the team's IndyCar operations. Blaney made the Playoffs with four top-fives and 12 top-10s in the regular season. He scored his first win with Team Penske in the Bank of America Roval 400 at the Charlotte Roval after leaders Martin Truex Jr. and Jimmie Johnson wrecked going into the chicane. The win advanced him to the Round of 12 Playoffs.[31] Blaney was eliminated from the Round of 12 after the fall Kansas race and finished the season 10th in points.